Narrator:Today is one sunny day, The Raiders are doing whatever they want and Stno, of course, is trying to find new ways to use his cyan energy

Stno:Geez, nothing ever happens around here since we stopped Reverse, his cronies and the others

Rakion:Right. so what do we do now.

Stno: Tekster? What exactly are you doing?

Rakion:A Teleporter, we can be able to visit any place we want undetected

Tekno: Like so (Puts his hand trough the portal and grabs one of Ben's Lightsabers)

Stno:Nice! maybe we can use that for fun

Tekno:There are still minor modifications i still need to do to this thing

Tekno:Alright, i do need a break after fixing that machine

Rakion:Can you cut that out Stno, it's getting repetitive

Ra:I Thought it was catchy 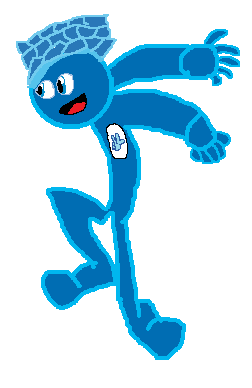 Tekno:(With a poker face) You have weird tastes in music Ra

Ra:Umm, is it me, or do i see a dead stickman in the middle of the room?

???:(Regains consiousness)Oh mama mia, my head is spinning!(Sees the Other Stickmen) Oh my (Turns into an oversized screw)

(Stno Interacts with the screw, before turning back into the stickman)

???:Umm, I Already broke the code once, and i'm not breaking the code again

Ra:Tell us who you are (Puts up fist) We have other means of making you talk

Ra:Wha? He Won't tell us his name

Stno:Didn't you hear him, he won't tell us because he has to hide his exsistance

Stno:We will have to wait tommorow to Question him

Ra:Stno wants to find new ways to use his powers

Tekno: Fine dad, hey I'll catch up with ya later

(Stno gets ready for bed)

???:Because i might have nightmares. I Usually sleep with my Masiya

Tekno:C'mon! Turn off the lights

Stno:Fine, you can sleep here tonight

Stno:Alright! (Turns off the lights and everybody goes to bed)

(Stno wakes up because of this)

Stno:If that's the case, you can sleep next to me

(Stno and ??? Are With the Rakion Raiders)

Shadow:Umm Stno, Who Exactly is he?

Stno:I Saw him before when i was watching "The Fixies" With him a few hours ago, so guys: This is Nolik

Zora:How did he get here in the first place?

Nolik:With my family, i fix every device that is broken, when i'm not doing that, i play with Simka and Tom Thomas

Nolik:We are fast, strong and crafty, we use this to help us in our jobs

Rakion:No, he means any abilities that can help us in battle

Stno:He's only five years old, so don't expect much on him, I did see he had good swordsmanship though

Stno:Anyway, we better show him the ropes around here so he won't get caught up in the confusion

Stno:They are the invaders that want to capture us and turn us into blues

Ra:You need a power to fend them off

Stno:Depends on what you're good at...

Zora:What is it? Bet you are not gonna tell everyone that incedent a few months ago?

Stno:N-No, i want you to train him (Points to nolik, who is waving)

(Nolik seen holding a bow and arrow, then shoots, the arrow bounces around the room and goes out teh window, hitting Zero)

Zora:I Think you're bad at this

Nolik:I'm not an expert at that.

StZero:(Bursting the Door open) WHO SHOT THAT ARROW?

Zero:Nolik? You mean that little blue?

(Zero Proceeds to Attack Nolik, only to be stopped by Stno)

Stno:Zero, he's only a little kid, don't think of him as a maverick, or blue for that matter.

Zero:Then why did he shoot?

Zora:I Head he was a great swordsman

Zero:A new recruit, His name is Nolik, i'm training him

Axl:Nolik? Why you training him Zero?

Zero:Stno says i have to help him find his power

Axl:Alright, just make sure he does not demolish the Building kay?

(Nolik is seen holding a Sabre)

Zero:So Nole, if you want to find your power, then you can copy this (Does a Variety of Moves From Megaman X 4-8, Ending with tenhousha)

(Nolik Attempts to copy all of zero's techuniques, but only after the first one, Nolik's Sabre Flies out of his hand, Hitting Axl)

Axl: Zero? Whose saber is this? (Points to the saber Stabbed in his chest)

(Nolik is seen with one of Axl's guns)

Axl:If you want to be a gunman,you need accuracy, and i'm here to give you that

(Axl Shoots 3 Cans, with each shot knocking the cans down)

(The Scene shows Nolik's failed attempts to hit the cans)

Stno:What is going on around ---(Doges one of nolik's shots) Here?

Axl:Teaching him how to use a gun

Stno:Nolik is only 5 Years old! How could you teach him that!

Axl:I Had no other choice

Stno:I Think i should take him away from here)

Nolik:J-Just stop, maybe i am not supposed to have a power, maybe i can i don't know, turn on the TV with my mind or someting ,But maybe not

(The TV Turns on)

Stno:Umm, who had the remote?

(They stare at the TV, then at nolik)

Stno:I Think we found his power

Tekno:The Power to Manipulate Gadgets at will!

Nolik:Really? (Stares at the lights,then they turn off, the computer, the cursor moves without the mouse moving)I DO HAVE A POWER!

(Nolik Plays around with his power, pranking everyone with a device, he turns on Tekno's Portal device and it opens, with Simka on the other Side)

Simka:Nolik! What are you doing there, and why do you look like that?

Nolik:I Don't know, but i finally have a power i can use!

Nolik:You have to believe me, i had one of the most wonderful day of my life!

Stno:Nolik? What are you doing here? and Who are you talking to?

Nolik:Simka, my sister, Why dont you meet her?

(Stno and the others walk up to the portal)

Martial:We should be asking YOU that question

Zora:Who are you in the First place?

(The Team is Silenced)

Stno:I Am Stnoriel, Leader of the Slashers, the group that was asking you earlier was the Rakion Raiders

Simka:Raiders? Do they Pillage Villages or Anything?

Rakion:Not that kind of Raiders!

Simka:Exactly, Nolik keeps being a jokester and usually gives us a job, because he keeps breaking things.

Stno:(Wow, Ironic for a Fixie) Anyway, can you come here for a second, into OUR realm?

Simka:Alright (Goes into the portal, but it spits her out)Strange.

Simka:Nolik was able to pass trought that hole, but not me

Tekno:That's because you don't have a preloaded Stickman form

Stno:Nolik was Able to Enter Because he Already has a stickman form i Drew him (Grabs a page from tthe fanfic Including Stnolik's Picture) See?

Simka:I Get it, so I Won;t be able to enter if don't have a form like that?

Simka:Alright, You gonna have to draw me one, while i wait, provided that tom Thomas does not break anything else

(Stno is Seen on the Computer, Drawing a Brown and Orange-Bordered Stickman)

Rakion:Umm Stno? Who are you Drawing?

Stno:IDK, But the Reason I Opened that is so i thought anybody was online

Tekno:So If you are Writing this, does this mean ...

Stezon:HEY! A User by the Name of anonymous user Is Reading this!

Stezon:He is Watching you make this:

Narrator:It is one Bright and sunny---

Ra:What night are you on?

Rakion:Yeah, i actually Rage Quitted a few times trying to beat 4/20 mode. (Lightbulb above head)I Have an idea

Stno:NO! I WON'T DO THAT! ESPECIALLY AT NIGHT!

Rakion: I Dare you to do it!

Stno:NO! THAT'LL GIVE HIM NIGHTMARES!

Tekno:I'll agree with him, one time, His sister told the story of the "Fixie Eaters". Then nolik got scared Stiff

Stno:*Groans* Fine. But if he get's nightmares, I'm personally gonna stuff you in a suit!

Nolik:You want me to play a game?

Nolik:Why is it called that?

Rakion:You must spend five nights at the place as a security guard

Stno:Yeah, and you have to "Spend" Five nights there

Ra:Let's get the Game Started

{Phone Guy+: Hello, hello? Uh, I wanted to record a message for you to help you get settled in on your first night. Um, I actually worked in that office before you. I'm finishing up my last week now, as a matter of fact. So, I know it can be a bit overwhelming, but I'm here to tell you there's nothing to worry about.}

{Phone Guy: Uh, let's see, first there's an introductory greeting from the company that I'm supposed to read. Uh, it's kind of a legal thing, you know.}

{Phone Guy+: Welcome to Freddy Fazbear's Pizza. A magical place for kids and grown-ups alike, where fantasy and fun come to life. Fazbear Entertainment is not responsible for damage to property or person.}

Nolik:Wow! I Wish that was real!

{Phone Guy+: Upon discovering that damage or de--}(Stno Uses Nolik's Device manipulation to fast forward the Scary things for nolik){Uh, now concerning your safety, the only real risk to you as a night watchman here, if any, is the fact that these characters, uh, if they happen to see you after hours probably won't recognize you as a person. They'll p-most likely see you as a metal endoskeleton without its costume on. Now since that's against the rules here at Freddy Fazbear's Pizza, they'll probably try to...forcefully stuff you inside a Freddy Fazbear suit.}

{Phone Guy:. Um, now, that wouldn't be so bad if the suits themselves weren't filled with cr----(Stno Uses Nolik's Device manipulation to fast forward the Scary things for nolik)Y-Yeah, they don't tell you these things when you sign up. But hey, first day should be a breeze. I'll chat with you tomorrow. Uh, check those cameras, and remember to close the doors only if absolutely necessary. Gotta conserve power. Alright, good night.}

Tekno: First night on the Job!

Nolik: Yes! Now if you excuse me, i'll {Checks Show Stage Camera, to find Bonnie Missing} FREAK OUT!{ Checks the Cameras to see Bonnie Hasn't gotten far, he is at the Dining room}

{Nolik Puts the Camera Down}

Nolik:Who'se idea is to make me play this game!

{Nolik Checks the hall lights to Find Bonne in the hallway

Ra:You have limited power, and by the looks of it

Stno:You should have lost by now

{Nolik Checks the hall lights to Find Bonne in the hallway

Stno:Is this going to be a Running----

Nolik:Hurray! I Beat the game

Rakion:You have a long way to go before you beat all five nights.

Ra:That was only the First night

{As Nolik Cycles trough the cameras, Bonnie Forces it down, killing the player, scares nolik, and delivers him to the game over screen}

Nolik: (Scared out his wits) What was that?

Stno:What happens when you get Killed (Covers his mouth)

{Five nights at Freddys Song Plays as a montage of Nolik's Deaths, Jumpscares and Stno Closing the Door for nolik (Stno:Yep, It's a running gag)

Nolik:(Panting) I Don't want to play that again

Tekno: I'm impressed that Nolik Managed to get to Night 4

Ra:I'm Suprised he made it.

Nolik:I Just don't want to be scared Ag--- (Tekno Plays a Clip of Freddy's Power on attack when Nolik Faces the Screen)---AIN! (Falls into a coma)

Stno:Told you that was a bad idea

(Leave Story Suggestions in the Comments Below!

Retrieved from "https://slushinvaders.fandom.com/wiki/User_blog:BrightXeno/Xtra_Dimension_Chapter_1?oldid=67866"
Community content is available under CC-BY-SA unless otherwise noted.