Stickyle (Kyle) is an orange stickman who's part of the Slush Fighters. He has the power to generate fire, especially fireballs (pyrokinesis). His power is based off of assorted RPG fire mages, as he always selects this character type.

As Stickyle stretches in his chair after playing some computer games, he sees Standrew knocked out and an army of Blues outside his door, and immediately sends a message saying this to Stucker. The two, along with Stedro, go outside their room and proceed to beat up the Blues. Stickyle incinerates every Blue coming into his range However, he is captured by Drabs, along with Stucker and Stedro. Later in the movie, Sticorey and Ben Stickobi free the trio. He later appears at the end of the movie to gang up on Big Blue.

Stickyle is one of the unlockable characters in the game. His special is best for destroying large clumps of tiles while dealing Massive amounts of damage

His Special is called Star Storm

The Effect of StarStorm is that it deals five damage for every tile next to it destroyed (Including itself) this is best used to get rid of large amounts of tiles. The Optimal amount of damage the special can deal is 60 (Stickyle tiles on the medium column)

On Stickyle's ultra, Star Storm, it shows his fingers during the end of his special attack. 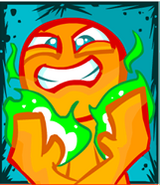 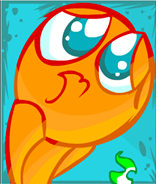 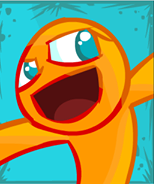 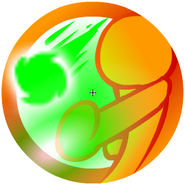 Stickyle's Icon in the first game 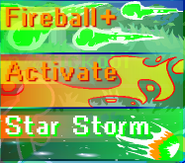 Stickyle's Upgrades in the first game 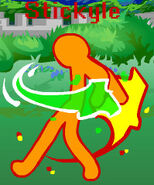 Stickyle's pose in the first game 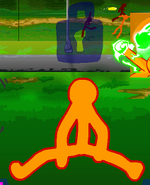 Stickyle using Star Storm on a Drab, a Blue and Big Blue, with StiCorey

Stickyle blasting a Blue attacking Slusher in the 1 Minute Summary

Stickyle avoiding capture by a rope
Add a photo to this gallery
Retrieved from "https://slushinvaders.fandom.com/wiki/Stickyle?oldid=80212"
Community content is available under CC-BY-SA unless otherwise noted.