Stick Luke is a sea green stickman with a blue border who's a member of the Slush Fighters. He has the power to create and throw tomahawks and their delayed Spawnahawk counterparts. This is a reference to Call of Duty: Black Ops.

Stick Luke is seen running into Slusher Wing, throwing tomahawks at every Blue he encountered. Near the end of his scene, he started using his pistols before running off and slashing a Blue with another tomahawk. Luke later appears to gang up on Big Blue.

Stick Luke is one of the fighters captured by Big Blue's men. He was caught when he and the other fighters in the middle fell into a makeshift pit made by the invaders where he was soon put in a cage and sent into a Binary Cell. He is later rescued after beating Data Wall.

Stick Luke has not been confirmed to be in this game, but his real life counterpart was one of the testers of the game along with Gildedguy.

However, after the game's cancellation, Stick Luke and the rest were never truly revealed to be involved. 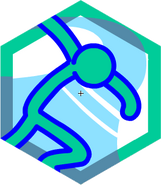 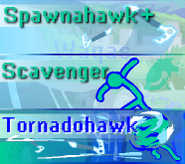 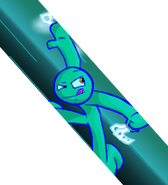 Stick Luke's "Spawnahawks" during his scene in the movie

Stick Luke during the montage

Stick Luke's Special Move in Slush Tile Rush, "Unleash the Sp'hawks!"
Add a photo to this gallery
Retrieved from "https://slushinvaders.fandom.com/wiki/Stick_Luke?oldid=80209"
Community content is available under CC-BY-SA unless otherwise noted.