Sthang (Hang) is a red stickman with a dark red border who is a member of the Slush Fighters. He is essentially a phoenix, with the ability to conjure fire and resurrect from his ashes after dying, which is a good thing for him since he dies the most out of everyone in the main group.

Sthang appears after Sthomas runs away from the Drabs and Blues surrounding him. Sthang was seen snoozing until his name fell on his head, waking him up. He later saw the Blues and Drabs standing and kills one of them due to his anger of being awakened. However, Sthang ended up in the middle of the Drab's shooting range and was shot dead. He then turned into a pile of ashes, much to the confusion of some Blues. Sthang eventually resurrected from the ashes and killed two of them until getting shot again. Sthang recovered once more and killed two more Blues before incinerating a whole group of Blues and Drabs. As he makes a pose, however, Sthang gets shot and dies again. He later makes an appearance to gang up on Big Blue.

Sthang is one of the fighters captured by Big Blue's men. He is later rescued after beating White Out.

It was not confirmed if whether or not Sthang was to take part in this game before it's cancellation, although it could be proven that he was going to take part in it somewhat as Gildedguy posted concept arts of Sthang using some new abilities.

"This fire stickman does great damage, but needs a quick nap before starting any chain."

3 Tiles = 10 DMG (Inflicts 'burn' on enemy)
On his losing tile,it shows that he is sleeping. 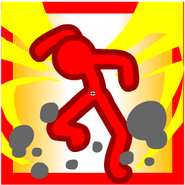 Sthang's Icon in the first game 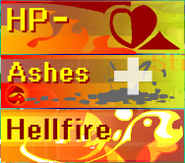 Sthang's Upgrades from the first game

Sthang's locked image in the first game
Add a photo to this gallery
Retrieved from "https://slushinvaders.fandom.com/wiki/Sthang?oldid=80211"
Community content is available under CC-BY-SA unless otherwise noted.