Stedro (Pedro) is a yellow Slush Fighter with a black outline. His ablities are based on many characters, Fox from Star Fox and Captain Falcon from F-Zero.

Just as Stedro was about to start a match of Super Smash Bros Melee, a Blue punched through the wall of his room, damaging Stedro's Gamecube and messing up the game. This angers him, prompting him, along with Stickyle and Stucker, to go outside the room to beat the fudge out of some Blues. Stedro blasts, reflects, and burns some Blues like Fox. He is, however, captured by some Drabs, leaving Ben Stickobi and Sticorey to save him, Stickyle, and Stucker. Stedro later appears at the end of the movie to gang up on Big Blue.

Stedro was not captured by Big Blue's backup men, making him the one of the first usable fighters in the game.

Stedro makes a cameo appearance at the start of the movie, along with Stickyle, as he is charging at Big Blue at Drillfield.

Stedro can be unlocked any time of the game, along with another random of the other 13 unlockable fighters. He is most effective when you use him in chain attacks, but be careful when using his special: Extra Pressure. Extra Pressure spawns more tiles in a fashion where its easy to use the special over and over again. This is a blessing and a curse, as this can either result in a quick victory, or a quick Game Over.

If you look quickly, you will see a gun on Extra Pressure(Fox)and at the end he is not peforming a kick, he is doing Knee Of Justice(Captain Falcon). 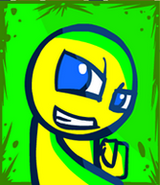 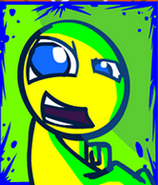 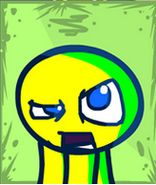 Stedro hitting a Blue during the montage in the first movie 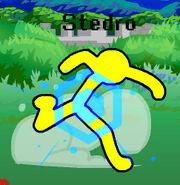 Stedro's pose from the first game 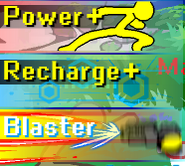 Stedro's Upgrades from the first game

Stedro's second icon
Add a photo to this gallery
Retrieved from "https://slushinvaders.fandom.com/wiki/Stedro?oldid=80547"
Community content is available under CC-BY-SA unless otherwise noted.