Limes are green stick women who somehow joined the Slush Invaders. They wield shotguns, although Drabs have proven themselves to being able to wield shotguns (and other guns) as well.

Limes only appeared near the end of the movie, where they were killed by Stick JK in an attempt to keep him, Westick, and Joshtick from reaching Standrew who was held captive at the time. The Limes did not make a major appearance due to this.

Limes were scrapped and replaced with Cobalts, so they never made it into the game.

Limes were supposed to be in the game as support to Blues and Drabs but were replaced with the Cobalt. Cobalts have high HP and defensive properties, therefore they were better for supporting Blues than Limes.

Limes officially return in this third game of the Slush Invaders series. They also have their new designs, alongside their shotguns, as well as their gender being revealed as an all female group, much like the Azures.

They can be encountered in the level Land of the Rising Lime during the first gameplay run, but can later on be encountered in any level before Hazy Home Screen. A new type of Lime is also introduced, who appears to be the leader named Armored Lime.

A female Lime from the second game 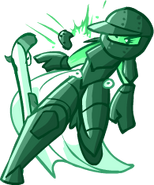 An attacked and injured Armoured Lime

A group of Limes from the first movie

A Lime tile.
Add a photo to this gallery
Retrieved from "https://slushinvaders.fandom.com/wiki/Lime?oldid=89748"
Community content is available under CC-BY-SA unless otherwise noted.