Joshtick (Josh) is a brown stickman with a white border who's a member of the Slush Fighters. He is the explosives expert of all the fighters, though he can also use an SMG well.

Joshtick, along with Westick and Stick JK, went in to save Standrew. Joshtick tosses a false bomb before blasting the door open, where he soon threw an explosive in a Drab's face, killing it and the other Drabs nearby. However, he gets kicked away by BigBoi, leaving Westick and JK to kill it. All three soon make a jump out of the building with Standrew, making a safe landing before a bomb Big Blue activates goes off. Joshtick later appears to gang up on Big Blue.

Joshtick is one of the fighters captured by Big Blue's men. He is later rescued after beating Slushy Ice Frosting.

Joshtick's pose in the first game 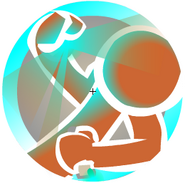 Joshtick's Icon in the first game 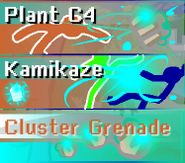 Joshtick's Upgrades in the first game

Joshtick's capture in the intro of the first game

Joshtick's "recipe" #3 in the Combo Cookbook, "Fast Phoenix"
Add a photo to this gallery

Retrieved from "https://slushinvaders.fandom.com/wiki/Joshtick?oldid=89614"
Community content is available under CC-BY-SA unless otherwise noted.