Blue Uno/An Angry Blue you beat up a couple of seconds ago is a member of the former Blue Baddies. He is a tutorial enemy, and later one of the final boss characters in Slush Tile Rush.

When the Slush Fighters first encounter Blue Uno in the beginning of their adventure back home, he challenges them, although he gets easily defeated due to how weak he is. As soon as the Slush Fighters reach the top of the tower, they discover Uno had recovered and was determined to beat them this time, although he is re-defeated afterward, along with Wicker Blue and Overly Zealous Blue.

However, in the conclusion of their adventures, the Slush Fighters find out that Blue Uno, along with his pet skunk had beaten them to Slusher and had grown more powerful than ever. With his health bar barely absorbing any damage, a block level of 5 and a dodge ability of 4, Blue Uno unleashes his strength upon the Slushers. However, despite his attempts to eliminate the Slush Defenders, Blue Uno is once again foiled for the 3rd time. His current status is unknown.

As a tutorial enemy, Blue Uno is the easiest enemy of all in the game, right before Blue Two, as it only takes 4 hits for him to be defeated. He is not able to send his own tiles against the player nor is he able to lock the player's tiles. Adding to this, he does not have block ability and even a dodge ability.

However, as the optional boss in Solarise, his fighting style changes to that of a regular Blue enemy. However, it only takes about 3 Special Moves to take him out (as shown in the tutorial), still making him an easy enemy to defeat.

In his Ultimate Form, however, he becomes a more formidable opponent. He is now able to send his own tiles against the player which lasts for 10 - 15 seconds, has a dodge ability (which activates after 4 turns) and a block ability (which blocks damages below 5). It is recommended that "spammable" Slush Fighters such as Sthang and Stedro are to be used, especially Sthang due to his burn capability in his Special Move. Blue Uno attacks after every 3 seconds, adding to this difficulty of the fight due to his tiles taking too long to be removed automatically. Sticorey is a good fighter to be used if the player has him in their team. Marcstick should also be enough to deal with Blue Uno, as his chain attacks deal incredible amounts of damage if he is used continuously, but this is quite difficult to do but is still possible. If the player is lucky enough to activate Marcstick's "Wild Strike" Special Move without encountering a "Failed Strike", it should take 3-4 Wild Strike's to finish off Blue Uno.

As An Angry Blue you beat up a couple of seconds ago:

As Blue Uno in his Ultimate Form: 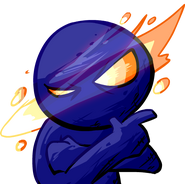 Blue Uno as "An Angry Blue that you Beat up a Couple Seconds Ago".

Blue Uno in his second form.
Add a photo to this gallery
Retrieved from "https://slushinvaders.fandom.com/wiki/Blue_Uno?oldid=89488"
Community content is available under CC-BY-SA unless otherwise noted.