Blues are the standard foot infantry of Big Blue, and the bulk of the Slush Invaders. They mainly utilize unarmed combat, and, while weak, are troublesome in large numbers. They are also capable of driving Mobiles in the game.

They can be annoying if they are grouped together, which makes them harder to kill.

Blues appear as the main offense forces that the Slush Fighters have to fight through. Despite managing to knock out Standrew and possibly Stickirby, they are minimal threats to the other Slush Fighters (surprisingly, this includes Marcstick). Although Big Blue's MARV states there are 90 Blues (the limit of troops Big Blue have is 128), more have been seen in both the game and movie.

Blues are the most common enemies in the game, just like how common they were in the Slush Invaders (movie), though they don't appear until Drillfield Day. They run along the ground and follow Big Blue, similar to Stickhanh. Unlike Stickhanh, however, they'll always be within the screen and attack anyone who gets in their attack range, which can be high (this does not apply when Stickhanh is played in the BigBoi Prime level). If left unattended, Blues will easily be able to defend Big Blue, other enemies, and even each other. Their health is relatively low, so one Blue trying to defend himself will not last long. However, large numbers of Blues can easily overpower your team of Slush Fighters...

After the events of the movie, all the Blues were supposed to have been eliminated. This was proven wrong, for Big Blue had prepared a small emergency force that was hidden behind some bushes. Though Big Blue appeared to be cornered, he turns the tables with his backup forces and captures nearly all the Slush Fighters.

Blues appear in the storyline once again after defeating the Ether Lord, when a Blue driving a Mobile helps Big Blue get away while Drabs distracted the fighters.

After going through Blue Base, the Slush Fighters find out the truth behind the Blues; they were all innocent stickmen captured to be painted into Blues. The Blues, along with the other Slush Invaders, become no more when the Slush Fighters destroyed BigBoi Prime, punched the paint off of Big Blue, and escaped the destruction of the Blue Base.

The Blues return in the second movie.

Unlike before in the first movie and first game, the Blues do not appear as prominent antagonistic characters, rather as simply background characters as nearly all of them are a part of the crowd, cheering on during the forced battle between Stucker and Sthomas. The Drabs were the main antagonists this time around.

Though, due to "tradition", some of the Blues were still defeated during Sthomas and Stucker's attempt to escape the arena and underground base, as the duo plowed through most of the group of Blues and Drabs that were in their way.

Although they were not as much of a threat, they were responsible for Stucker and Sthomas' recapture during the end of the movie.

The Blues make another return in the second game. They appear in groups to capture the Slush Fighters after 3 of them managed to escape captivity. Some of them wield lances, arrows and bows while others wear helmets.

During the Beta, only the standard Blues made an appearance as available enemy characters, along the Cobalts and their "upgraded" versions, Helmet Blues.

It is unknown why the Blues made a return in this game, as this game was later cancelled by Gildedguy. This game was supposed to take place after Slush Tile Rush, which would have continued the story of the Slush Fighters' battle against the "apparently-still-operative" Slush Invaders.

Blues returned in the third game. It is a possibility that they are still operative, only in few numbers since the main factory on the moon is destroyed by the Slush Fighters. Though it seems that there may be different commanding bases in separate nations around the world since some of the Blues wear armor.

Though, in supposed chronological order, this game takes place before the events of the second game before it was cancelled. 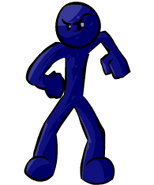 A Blue's design and pose from the second game 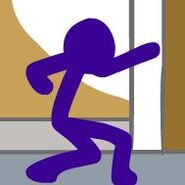 A Blue's appearance during the first movie

A Blue hitting Marcstick during the Montage (Note that, excluding Sthomas, the Blue hit Marcstick instead of him)

Stickyle fighting off a group of Blues during the first movie

A Blue from the audience in Slush Invaders: Duel losing his cup of soda after Sthomas and Stucker's rampage

Retrieved from "https://slushinvaders.fandom.com/wiki/Blue?oldid=89693"
Community content is available under CC-BY-SA unless otherwise noted.