Big Boi Prime is a gigantic cyborg and Big Blue's last line of defense against the Slush Fighters. His attacks include smashing the ground with his fist, generating fire, and shooting lasers out of his eye. He is also the last and largest enemy in the entire game as the boss of the 21st level.

Big Boi Prime never made an appearance in the movie, because during that time, he was still BigBoi then.

When attacking BigBoi's body, pieces of scrap metal, paint, and space trash will fall off and roll onto the stage. Some of these bits will damage Standrew, while others will heal BigBoi.

Just as Standrew grabbed Big Blue by the neck, ready to end it all, a platform rises out of the ground, carrying Big Blue upwards. From his lofty perch, Big Blue reveals his final trick: BigBoi Prime. The slush defenders, unable to directly attack Big Blue, must beat up the gargantuan cyborg to continue their assault on Big Blue. 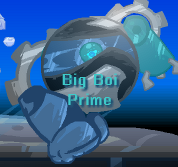 Gameplay caption of Big Boi Prime, with Standrew trying to fight him off on his own 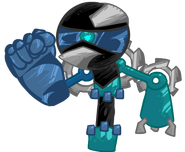