Azures are female blues who use magic, mostly in the form of force fields, as their means of both defense and attack. They wear a blue cape with a slighter shade of white mixed in it, wear light blue skirts and a definitive set of three eyelashes on both sides of their eyes, marking their gender.

Though originally, Azures were speculated to be male, due to the fact that, excluding the Limes, Toasters and Cobalts, the Slush Invaders were seen as an all male antagonist group, much like the Slush Fighters. A given assumption to this would be, not only from the fact the Slush Invaders are indeed an all male group, but from the fact of their appearance in the first game, which would set off the appearance and idea that they are male.

Though later on in the second game, their genders are revealed to be female, making the Slush Invaders group a mixed group of both male and female. However, male Azures may have been the ones to appear in the first game, while the females took over in the second game, though this has not yet been proven as such, therefore, speculation to whether or not the female Azures are actually the same ones from the first game are still in debate. However, it would be more logical for Azures to be an all-female group due to mages usually being depicted as females.

Azures did not appear in the movie at all. They may have a bigger role in future games or movies.

Azures are defensive mages introduced in the Slushy Ice Frosting level and will attempt to protect an enemy by shielding them with invincibility, similar to Sticorey, as it both looks shimmery and makes their respective enemy untouchable for their shields are almost indestructible, that nothing can destroy them. To disable their protection, attack the Azure that protects the Blue (look at the pointer towards the source from) to continue assault. As this also extends to other Azures, Cobalts, Drabs and Big Blue himself, you should get rid of them quickly or risk losing the level and have to restart.

Azures also have the least amount of health, next to Blues, so taking them down should be easy and a priority if ever a mob of them appear. The player mostly has to think fast against them as if they were to shield Cobalts, it would make passing through a level far more challenging. Even more if several were to appear and start casting shields on nearly half of the enemies on-screen, thus making a level nearly impossible to finish and will instantly result in a game over.

Azures are introduced in Slusher and have 8 defense points each. They take a lot of damage when an attack passes the defense points and they create a single lane (3 tiles vertically) of their own tiles; Azure Tiles. They first appear in the level Slusher, and they seemingly only appear in that level in the second game.

In this instalment of the series, however, their genders have been confirmed to be females, making them one of the only two known groups to be an all female group. 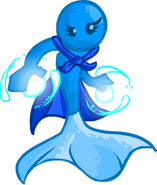 Azures, as they appear in Slush Tile Rush

Azures, as they appear in Slush Invaders: Game

Early Drafts of the Azures
Add a photo to this gallery

Retrieved from "https://slushinvaders.fandom.com/wiki/Azure?oldid=89706"
Community content is available under CC-BY-SA unless otherwise noted.